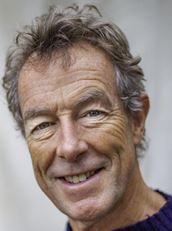 Patrick Dickson is an actor, teacher and creative. He is a founding member of O’Punksky’s theatre, creating work since 1990. Roles for O’Punksky’s include Maurice in The Night Alive, JPW King in The Gigli Concert, Sharkey in The Seafarer and Malcolm in Little Malcolm and his Struggle Against the Eunuchs. Patrick has written and now performs a one-man production, Victor Ego or The Brainstorm.

Patrick is an accomplished voice artist working often with the ABC and many Commercial producers. He has production experience of short films, theatre and now self-produces Audio Books including Victor Hugo’s The Toilers of the Sea and David Allen’s Kabaka Lear.