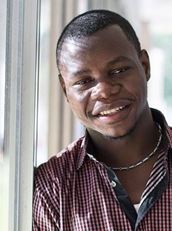 Future D. Fidel is a Congolese-Australian playwright. Future was born in the Democratic Republic of the Congo and became an orphan at the age of 13. Living with his sister at Uvira on the shores of Lake Tanganyika, he fled across the lake to Tanzania when his village was threatened by soldiers during civil unrest. He first spent four years in Nyarugusu refugee camp in Tanzania before moving to Mkugwo refugee camp where he spent a further four years, before coming to Australia as a refugee in 2005. In Australia, Future joined a Kwatamaja (African) Dance Group and participated in acting workshops with other young refugees. Together they formed the Fimbo Boys. Fidel contributed to the community theatre work I Am Here, also featuring other young people who came to Australia following conflict. Future became the artist in residence at La Boîte Theare Company where he developed his debut play, the four-time Helpmann nominated Prize Fighter. His first novel, under the same name was released in 2018.