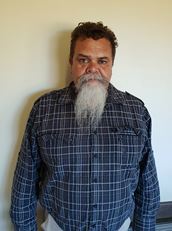 Adrian Stanley will no longer be appearing at the Festival.

Adrian Stanley is the proud father to five girls and has six grandchildren. His language group is the Kallalli people from Queensland and the Boandik people from the South east of South Australia. He collects timber, carve, paint, an art form called pyrography, and is doing up two utes and two motorbikes. Adrian dabbles in medicinal herbs - both Aboriginal and non-Aboriginal forms.