On Literary Lies at the Opening Address

01 May 2019
Back to stories
Categories
Archives

This year, Estelle Tang joins us as our Festival blogger. Here, she recaps the Opening Address, where literary luminaries Max Porter, Meg Wolitzer and Nana Kwame Adjei-Brenyah spoke on this year's theme, Lie to Me. 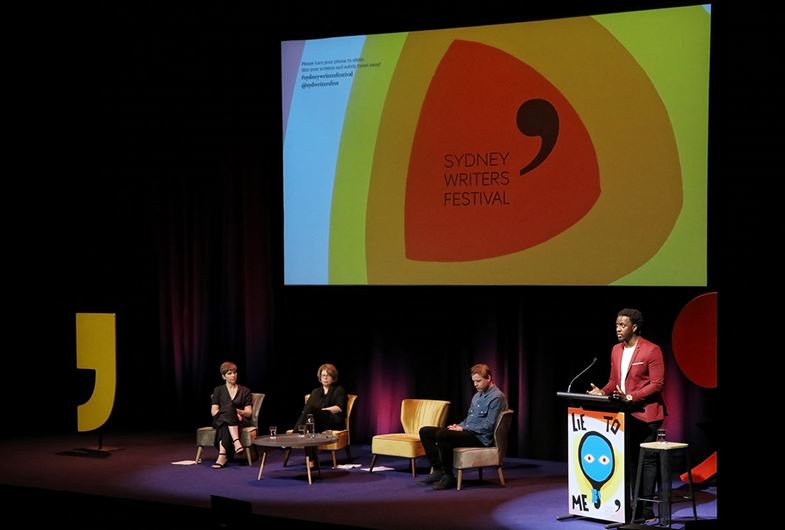 Perhaps the Sydney Writers’ Festival theme is a little on the nose this year. “Lie to Me”? That’s too much. It’s too close to home. We’re supposed to tell the truth, aren’t we? But we all lie. And we’re all lied to, constantly. By people we love, people we know; people we hate, people we’ve never met.

Even the three speakers at the Festival’s Opening Address at Carriageworks on Tuesday night admitted to the crime. Beloved novelist Meg Wolitzer confessed to an embarrassing summer camp lie, all literature and public shaming. New York’s Nana Kwame Adjei-Brenyah let slip that he hadn’t properly read all the emails from the Sydney Writers’ Festival team. Lanny author Max Porter reminded us that we’re so accustomed to politicians lying that they have a whole vocabulary – nay, a whole language – to accommodate it.

Maybe we’re getting ahead of ourselves, made an assumption that lying is bad. Wolitzer, author of The Interestings, The Wife, and The Female Persuasion, recalled the first time she’d been lied to, by a classmate who’d told her that her father was none other than Johnny Cash. That kind of lie is easy to understand. Wouldn’t you rather have a famous genius as a dad than your regular old dad, your absent dad, your very mean dad? Wolitzer even admitted to an ostentatious lie of her own: prominently carrying around Thomas Mann’s The Magic Mountain all summer long, purporting to have read it, when she had no idea what lay inside. That’s a lie of the same kind: not a white lie, perhaps, but a lie of aspiration, of wanting to be someone else.

And ultimately, isn’t that what novelists do? Help us understand what it’s like to be another person?

Fine: That kind of lie, we’ve decided, is acceptable. (We’re all here at a literary festival – we have to admit we’re okay with the beautiful kind of lie that is fiction.)

But not all lies are so modest in scope, so untreacherous. When Adjei-Brenyah took the stage, he said, “My name is Ben Simmons and I come from America, where everything is fine.” Obviously, that’s not his name. And sure, America is doing great‚ if you’re a white billionaire. Everyone else, though? Kind of screwed. No thanks to the man Adjei-Brenyah called “the Michael Jordan of the obvious evil lie, Donald Trump.” Take one of #45’s infamous and alienating comments, from last November: “At this very moment, large well-organised caravans of migrants are marching towards our southern border. Some people call it an invasion… These are tough people in many cases; a lot of young men, strong men and a lot of men that maybe we don’t want in our country.”

Incorrect? Certainly. But once he said it, it became real for all of us, whether it was true or not.

That kind of discombobulation is endemic to our lives now. Max Porter, coming from “Brexit Britain,” closed out the evening by thrusting us sidelong into the sly, ugly, multifaceted, longstanding oppression of the truth wreaked by politicians. Taking on the persona of a political David Attenborough (he even attempted the voice), he identified a particular type of pollie: “The English liar.” This kind of fabricator has several different ways of lying. He has several ways of distracting you from noticing that he’s lying. It’s not a tall tale; it’s “a better spin on things.”

Who do these kinds of lies serve, though? Don’t we have other, bigger things to think about: racism, climate change, each other? Porter quoted French philosopher Simone Weil: “Truth is sought not because it is truth, but because it is good.”

It’s a lot to think about. Fortunately, we have the rest of the week to chew it over.

Estelle Tang is a senior editor at ELLE.com.