Farz Edraki on a Literary Leap of Faith

20 May 2022 Feature
Back to stories
Categories
Archives 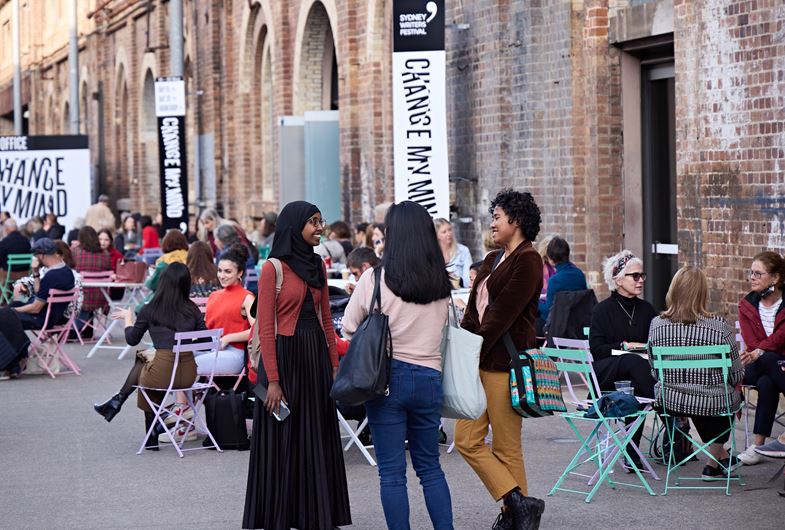 Farz Edraki, Iranian-Australian writer and a deputy editor at ABC Everyday shares the life-changing impact of words and taking an imaginative leap of faith into Sydney Writers' Festival.

Three days before the Opening Night Address, I’m sitting in a community hall in Coburg, watching a friend deliver vows under a wooden arbour. A slight crack in her voice in I call upon the persons here present has me searching my pockets for any scrap of tissue. I settle for my sleeve. The ceremony reminds me of something a literature lecturer once said about the magic-like quality of words at weddings: ‘You’re laying a claim to the future: this story will continue to be true.’ Later in the ceremony, the celebrant brings out a packet of melting moments biscuits.

Six years ago, I walk into a packed Sydney Town Hall. I’ve travelled three-and-a-half hours on a Murrays bus from Canberra to see Jonathan Franzen. I’m still in my ‘Worship of White Male American Authors’ phase — and if you didn’t experience that in your twenties, then congratulations, you had a social life.

A minute before the 2022 Address, I walk into a packed Sydney Town Hall. This time, everyone is in masks. This time, the line-up is something to write home about: Yankunytjatjara poet, author, and memoirist Ali Cobby Eckermann; Bidjara and Birri Gubba Juru author and academic Jackie Huggins; Yuwaalaraay author Nardi Simpson.

If a writers’ festival is about ‘building a community around imaginative leaps of faith’, as Artistic Director Michael Williams tells us, then here is one leap we are taking together this weekend: that words have power.

Jackie stands at the podium, behind her the grand organ under the proscenium arch. This hall has been the forum for many stately speeches, and this is one of them.

The night before a red orb hangs in the sky. Scrolling on my phone, a newspaper headline reads: ‘What does the May full moon mean for your star sign?’

In her speech, Jackie admits she’s a stubborn Leo, and the audience laughs.  I’m again reminded of the quiet power of words when she says, quoting Henry Johnson Junior: ‘Let’s start a revolution. A revolution with no guns but words and actions to inspire a generation.’

Reading changed Ali Cobby Eckermann’s life, allowing her to see herself in — and draw strength from — characters on the page: ‘If they could survive and find their way, then so could I.’ She felt on the outside, she says, until she discovered books. She reads ‘I Tell Ya True’ and even via video link, you can feel the white-hot sentiment from the screen.

Ten years ago, Nardi Simpson sang at the Sydney Writers’ Festival launch by way of an Acknowledgment of Country. ‘We often get these requests, to perform in language,’ she says. ‘A preamble. Be the protocol, the thing that needs to be done before the actual event begins.’

That night, she tells us, she made a promise to herself: ‘I'm gunna talk at that festival one day. And I won’t have a bloomin guitar with me when I do.’

Tonight, as a headliner, she’s speaking directly to her teenager in the audience: ‘Son, when you are brave enough to share the beauty and ugliness of all that you are, not only do you descend from thousands of generations, you become their love,’ she says. I peer over the balcony ledge from the top floor to try and see his face in the audience below.

An hour later, over noodles with Tacita, it’s Nardi’s words I’m still mulling over. ‘Bring it all forward. Old and new, pass that down the line.’ For Nardi, it’s passing stories across generations – 2,000 generations, no less – that is important. Not personal achievement. Not ego.

If a writers’ festival is about ‘building a community around imaginative leaps of faith’, as Artistic Director Michael Williams tells us, then here is one leap we are taking together this weekend: that words have power. That even in these ChallengingTimes™, literature can be a distraction, a source of strength, an inspiration, a comfort, a way of making sense of things. Words are an act of survival. They can be legally binding. They’re the reason we’re together, again. And they are sometimes inadequate, like these 663 attempts at saying: I do.