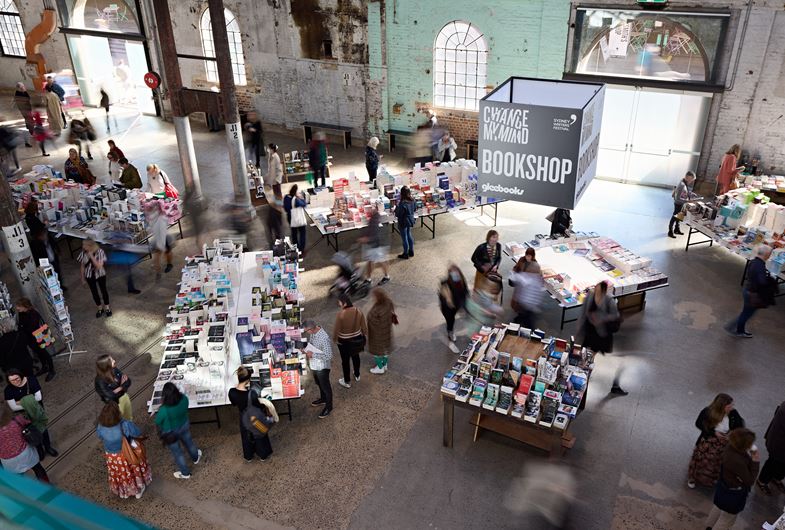 Andy Palmer shares some of his favourite memories across his long history with Sydney Writers’ Festival, tells us why he believes SWF is an important cultural institution, and gives insight into why he choose to leave a gift to the Festival in his will.

SWF: What made you decide to leave a gift in your will to Sydney Writers’ Festival?

AP: I have worked my entire career as a publicist in the Australian book industry and it’s been very good to me. Growing up the son of a country solicitor, my father’s mantra was always, ‘get your affairs in order.’  Having no dependents myself, and approaching my 60th birthday, I spent much of 2022 thinking about legacy and the best way to distribute my estate after I’m gone.

I knew I wanted to give back to the industry that has given me so much, so I began looking at setting up a foundation with disbursements to various arts organisations, including Sydney Writers’ Festival. It became complex and I had concerns about how the foundation would be administered. I then discovered the Epilogue Circle and found a much better and simpler solution: I would leave a gift to an organisation that I love, run by people I know and trust.

I would leave a gift to an organisation that I love, run by people I know and trust.

SWF: Do you have any particularly fond memories of the Festival? What do you love most about SWF?

AP: I think I’ve been to every Sydney Writers’ Festival since its inception in 1997. Every Festival comes with its own set of fond memories but every year, without fail, I’m reminded what an engaging and stimulating experience the Festival provides. The event has grown so much over the years but I wish even more people would attend and share the joy. Every year I try and bring a curious friend who has never been to the Festival before. It’s my own kind of audience development strategy.

I’m genuinely excited in the lead-up to the May program launch, not only to hear the stellar line-up of writers and thinkers but also to find out the theme. Whether it’s Lie to Me or Change My Mind or Within Reach, it always seems to hit the zeitgeist and strike the right chord.

I clearly remember the first Festival at Walsh Bay when it poured with rain over the main four days. In what seemed like a brilliant idea on paper, the Festival Bookshop was housed on a floating pontoon moored to the wharf. By day two, everyone from the booksellers to the punters and the authors signing books became green with seasickness. The floating bookshop was never to be seen again.

Meeting Hanya Yanagihara at the 2016 Festival was an absolute highlight. I was completely bowled over by her second novel A Little Life and worked hard to control my excitement in front of her. She was more than gracious and genuinely engaged with my many questions about her wonderful book.

Another highlight was the beauty and power of Adam Goodes reading The Uluru Statement from the Heart at the Within Reach Gala at Sydney Town Hall in 2021. Those words floor me every time I hear them but they had so much more meaning coming from Adam.

Every Festival comes with its own set of fond memories but every year, without fail, I’m reminded what an engaging and stimulating experience the Festival provides.

AP: Writers are the very core of everything we do in publishing. Yet, somehow, these essential creators have become some of the most poorly paid workers in the industry. I’ve been honoured to meet and work with many hundreds of writers across every kind of genre. It has been such a privilege to work with these talented people, to help establish many careers and help to sustain others. My hope is that each year this bequest will financially assist a promising young writer so they can continue their work.

I wish to establish an annual prize, administered by Sydney Writers’ Festival, for as long as it’s viable to do so. The prize would not be judged but rather conferred by an established writer (chosen by the Festival) to an emerging writer whose work they admire. The two writers would then form part of a public event at the Festival to discuss the emerging writer’s work and ambitions.

My hope is that each year this bequest will financially assist a promising young writer so they can continue their work.

SWF: What would you say to someone else who was considering making a gift in their will to Sydney Writers’ Festival?

AP: Firstly, get your affairs in order and ensure you have a will. Every year, Sydney Writers’ Festival brings the writing community together in a gala celebration of ideas and writing in all its forms. The Festival champions writers from all stages of their careers and from all walks of life. I would urge others to consider taking control of their own legacy by making a pledge to the Festival so it can continue its work for the enjoyment of future generations. If you love the Festival as much as I do, support it.