What better remedy for isolation than a great read that takes you places?

We’re celebrating the writers and thinkers who didn’t get to share their stories at the Festival we had planned to put on at the end of April. To start, our programming team have shared the books they're bunkering down with – from their favourites of this year's program to the stories they can't wait to read.

Add our picks to your book club reading list, and let us know what you think. To quote George Saunders at the 2017 Festival, “even in dark times, human beings can come together through those holy acts of reading and writing”.

Check out Gleebooks to get your (sanitised) hands on these excellent reads. Gleebooks is currently offering free delivery to all addresses within the Inner West Council and City of Sydney Council boundary areas, and free delivery for orders totalling $50 or more to other locations across Australia. 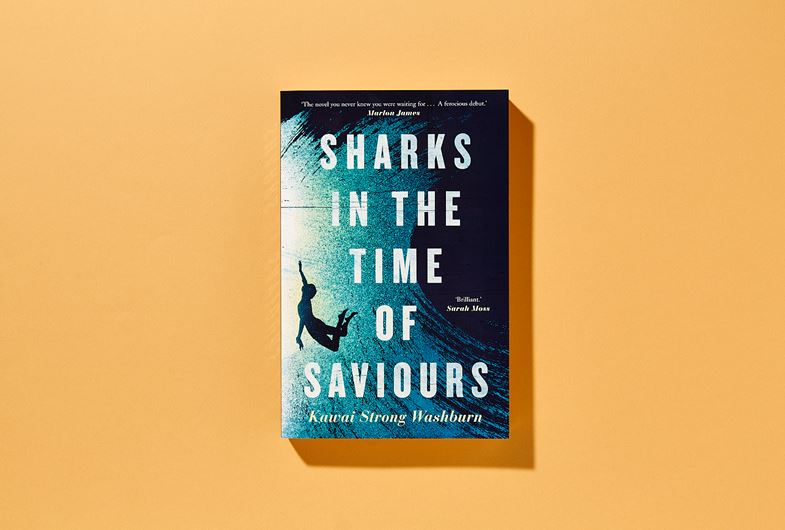 Sharks in the Time of Saviours, Kawai Strong Washburn

Kawai Strong Washburn’s virtuosic debut is a gripping modern epic that I’d recommend to anyone who loves Min Jin Lee, Hanya Yanagihara and Marlon James. This family saga begins in 1995, Kailua-Kona, Hawai’i, when seven-year-old Nainoa (Noa) Flores is saved from drowning by a shiver of sharks – a sign that his life is favoured by the magic of ancient Hawaiian gods. Young Noa becomes a sort of faith healer, and his parents leverage his gift for much-needed cash as the sugar cane economy crashes. This is an astonishing, brash and beautiful story about the broken American dream rubbing uncomfortably against old myths and magic, about the trauma that modern life inflicts on land, and how love and grief, tragedy and comedy are powerfully intertwined.

Ronnie Scott’s debut novel, The Adversary, was one of my most anticipated 2020 reads. Since I turned the first page, my continuing and changing response to this book has given it a Rorschach-like quality in my life. Across a hot, confusing and clarifying summer, the protagonist has conflicting experiences and attempts at connection and isolation in a social network characterised by introversion and financial stress. Ronnie has astutely depicted a particular slice of queer Melbourne life with a sharp eye and deep compassion, and I found myself feeling homesick for a city I’ve never lived in.

– Amelia Lush, Head of Children's and YA Programs

A cinematic and dreamlike novel, Braised Pork is the debut from 27-year-old Chinese author An Yu. Moving deftly between realism and surrealism, Braised Pork follows Jia Jia, a young woman who finds her husband dead in the bathtub of their Beijing apartment, a sketch of a strange creature beside him. As she sets out to discover what it means, the story expands to explore a world beyond words, winding from the high-rises of contemporary Beijing to the plains of Tibet. A compelling examination of contemporary China and the surreal and mythical nature of loss, told in An’s fresh and lyrical prose, Braised Pork is one of the best debut novels of the year. Jia Jia’s story will stay with me for a long time to come.

I’ve always thought I was a homebody – that is until I started self-isolating and realised I’ve never actually spent so long firmly in one place. I rarely take the time to cook for myself, so being stuck at home has finally provided me with the opportunity – and also a way to try use up the strange and wonderful ingredients in my pantry. Fresh out of excuses and toilet paper, I’m setting myself the challenge of cooking more regularly.

Unlike my programming colleagues – who can all whip up something delicious in no time at all – the more cookbooks I accumulate, the less I tend to cook. Maybe I’m intimidated by the perfect photography? The long list of ingredients I can’t always splash out on or find? Perhaps I’m just too busy reading other books where the plot doesn’t revolve around temperatures and timers.

Well, not anymore! I’ve taken Anna Jones’ award-winning vegetarian cookbooks into the bunker with me, and I’m sure I’m not the only one. I suggest starting your morning with her seeded banana bread with lemon sesame drizzle, followed by her sweet potato quesadillas for lunch and lemony lentil and crispy kale soup for dinner. Then top it all off with one of her salted caramel crack brownies.

And don’t despair if you can’t get your hands on one of her beautiful editions – she also writes a regular column for The Guardian. I don’t know if there’s a better way to make the most of this time inside.

Books we can't wait to read

I’ve been waiting to read Rebecca Giggs’ first book Fathoms ever since I read her spectacular essay ‘Whale Fall’, which was published in Granta in 2015 and documents Rebecca’s efforts to help push a beached humpback whale back out to sea. I think I’ve returned to this piece a dozen times in the years since, regularly recommending it to friends and finding myself drawn in again by Rebecca’s intelligence, empathy and perfect sentences like these: “The whale’s billiard-ball eyes tumbled in its head and its breathing sounded laboured. The sharks slid into vapour, a squinting rumour. No blood on the tideline.”

Fathoms: the world in the whale will finally be published next month, and if possible, Maria Tumarkin’s endorsement has made me even more desperate to read it: "I can’t think of many books in which love for the world and uncompromising, ever-deepening rigour come together in this way. Time slows down. This book makes a permanent dent in the reader."

Surely I am not alone in turning to science fiction in times of real-world chaos. And during this period of social distancing, having a new Jeff VanderMeer novel to get lost in is a small gift I’m exceedingly grateful for. Jeff’s visionary writing – always eerie, mind-bending and frighteningly plausible – can feel at times like a hazy lucid dream from which the reader cannot wake. Dead Astronauts is the long-awaited companion of Borne's exhortation of capitalism, corporate greed and biotechnology. I have no doubt that Dead Astronauts will be its own strange and thought-provoking novel and I cannot wait to get reading.

– Amelia Lush, Head of Children's and YA Programs

In this strange world of fear, uncertainty and mistrust, hope is something I think we could all do with a little more of. From 17-year-old Daisy Jeffrey, one of the lead organisers of the Australian climate strikes, comes On Hope, a rallying cry for climate action and a reflection on why Daisy is choosing hope over indifference. On Hope has been billed as "showing how ordinary people can change the world and help save the planet". As we see the overwhelming importance of community and social responsibility on an individual scale, it sounds like exactly the sort of book we need.

Tara June Winch’s long-awaited second novel The Yield is extremely high on my bunker reading pile. Described as a profoundly moving story of a dispossessed people and culture, it’s been shortlisted for both the Victorian Premier’s Literary Award and the Stella Prize (the latter of which will be announced live here at 8pm AEST on Tuesday 14 April 2020). The Yield is the Wiradjuri author’s first novel since her 2006 debut Swallow the Air, which was published to wide acclaim when she was just 26.

The Yield took Tara more than a decade to write and spans 200 years of Australian history. Interwoven throughout the novel are dictionary entries by one of the novel’s central characters, Albert ‘Poppy’ Gondiwindi, who like Tara, is determined to pass on the language of his people.

“The yield in English is the reaping, the things that man can take from the land. In the language of the Wiradjuri yield is the things you give to, the movement, the space between things: baayanha.”

“Winch asks big questions of this country,” says Bruce Pascoe. “Is the answer within us?”