The newest works of non-fiction by Australian writers Delia Falconer and Indira Naidoo offer deeply personal and profound meditations on our relationship with the natural world. Delia’s Signs and Wonders explores how it feels to live as a reader, writer, mother and lover of nature in an era of extreme ecological change. Indira’s The Space Between the Stars is the poignant story of awakening to the power of nature in the wake of her sister’s passing. They appear in conversation with Julia Baird (Phosphorescence). 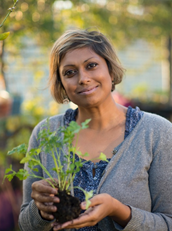 Indira Naidoo is a journalist and broadcaster. During her 30 year award-winning career Indira has reported for and hosted some of Australia's most well-regarded news and current affairs programs including ABC TV's 7.30 and SBS's World News. She currently hosts ABC Radio's Weekend Nightlife show. Indira's first book, the best-selling Edible Balcony charted her experiment converting her apartment balcony into a thriving vegie patch. Her latest book, The Space Between the Stars, focuses on how nature helped her through her grief after her younger sister took her life.

Delia Falconer is the author of the novels The Service of Clouds and The Lost Thoughts of Soldiers and Sydney, a personal history of her hometown. Her writing has been widely anthologised and shortlisted for prizes across the fields of fiction, non-fiction, history, and biography. In 2018 she was awarded the 2018 Walkley-Pascall Award for Arts Criticism. Her fourth book, Signs and Wonders: Dispatches from a Time of Beauty and Loss was published in 2021.