Join us for a recording of AWAYE!  from ABC RN. Host Rudi Bremer talks to Indigenous Festival guests Evelyn Araluen (Dropbear), Jackie Huggins (Sister Girl and Jack of Hearts: QX11594), Lorna Munro (Paper Dreaming) and Chelsea Watego (Another Day In The Colony) about writing as a political act. AWAYE! presents diverse and vibrant Aboriginal arts and culture from across Australia.

Evelyn Araluen is a poet, researcher and co-editor of Overland Literary Journal. Her widely published criticism, fiction and poetry has been awarded the Nakata Brophy Prize for Young Indigenous Writers, the Judith Wright Poetry Prize, a Wheeler Centre Next Chapter Fellowship, and a Neilma Sidney Literary Travel Fund grant. Born and raised on Dharug country, she is a descendant of the Bundjalung Nation. Evelyn’s debut collection Dropbear won the 2022 Stella Prize. 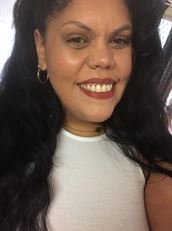 Lorna Munro or ‘Yilinhi’, is a Wiradjuri and Gamilaroi woman, multidisciplinary artist and regular radio and podcast host at Sydney’s Radio Skid Row. A long-time active member of her Redfern/Waterloo community, her work is informed by her passion and well-studied insight in areas such as culture, history, politics and popular culture. Lorna has travelled the world showcasing her skills and distinctive style of poetry and political commentary. She was also the sole designer and creator of Sydney’s—and possibly Australia’s—first initiative to teach Aboriginal language through poetry, in partnership with Red Room Poetry in 2015. Throughout her career she has been on stage, in films and on paper. She compiled and edited Paper Dreaming: Our Stories Our Way. Lorna continues to work tirelessly mastering many art forms, raising funds, and supporting and advocating for her community and her people on the local, national and international stage. In 2019, Lorna was announced as a recipient of the Wheeler Centre’s Next Chapter fellowship.

Chelsea Watego (formerly Bond) is a Munanjahli and South Sea Islander woman and Associate Lecturer within the Aboriginal and Torres Strait Islander Studies Unit at The University of Queensland. With over 20 years’ experience working within Indigenous health as a health worker and researcher, she is a prolific writer and public intellectual. She is a founding Board member of Inala Wangarra, an Indigenous community development association within her community, and was one half of the Wild Black Women radio/podcast show. Her forthcoming book Another Day in the Colony is to be released in November 2021.

Rudi has been a radio broadcaster since 2012. Having honed her skills at community radio, Rudi initially joined the ABC as a master control technician before returning to her producer roots in 2017. She has a unique perspective on how the ABC works — from chasing interviews to switching satellites. As the presenter of RN Awaye! and ABC kids Listen's Little Yarns, Rudi relishes the opportunity to share her love of performing arts, literature and Indigenous languages — like her own, Gamilaraay.