Three writers of recently published works of memoir and biography consider the role research and artistic licence play into putting a life onto the page. Bernadette Brennan (Leaping into Waterfalls: The enigmatic Gillian Mears), Sara El-Sayed (Muddy People) and Yves Rees (All About Yves: Notes from a transition) sit down with Caroline Baum to discuss the processes, ethical considerations and surprising joys of writing from reality. Bernadette’s newest biography chronicles the life of writer Gillian Mears, Sara’s memoir charts her upbringing in an Egyptian Muslim family in Brisbane, and Yves’ memoir recounts their story of the trans experience and re-becoming.

Sara El Sayed is a writer based in Meanjin (Brisbane). Her work appears in the collections Growing Up African in Australia and Arab-Australian-Other, among other places. She is currently a recipient of a Queensland Writers Fellowship. She was shortlisted for the 2020 Queensland Premier’s Young Publishers and Writers Award, and the 2019 Richell Prize for Emerging Writers. Her debut memoir, Muddy People, is out now. 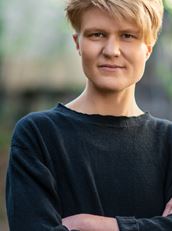 Dr Yves Rees is a historian and writer living on unceded Wurundjeri land. They are a Lecturer at La Trobe University and co-host of the Archive Fever podcast. Yves is the author of All About Yves: Notes from a Transition and co-editor of Nothing to Hide: Voices of Trans and Gender Diverse Australia. They were awarded the 2020 ABR Calibre Essay Prize for their essay 'Reading the Mess Backwards'.

Caroline is the author of Only: A Singular Memoir about being an only child, published in 2017. Her life-writing has also appeared in several anthologies including My Mother, My Father: On Losing a Parent, and Rebellious Daughters. Life Sentences, her podcast about the practice of contemporary biography is available on all major platforms. Caroline is the winner of the 2015 Hazel Rowley Award, and her journalism has appeared in The Sydney Morning Herald, Griffith Review, and The Guardian. Caroline is the Ambassador for the Older Women’s Network in NSW.