The Climate Cure: A Global Perspective

In the face of record heat and natural catastrophes, experts believe that this year’s UN climate talks in Glasgow may be the last chance for global cooperation on the crisis. Join renowned climate scientist Tim Flannery (The Climate Cure: Solving the Climate Emergency in the Era of COVID-19) as he brings together some of the most respected colleagues in his field to examine what progress is being made, the vested political and corporate interests holding us back, and the vital next steps to salvage a livable future. He speaks with eminent climate researcher Will Steffen, with contributions from remote guests Christiana Figueres, architect of the Paris Climate Agreement, and energy industry leader Prasad Menon.

Tim Flannery is a paleontologist, explorer and conservationist. He is a leading writer on climate change and the 2007 Australian of the Year. His books include the award-winning international bestseller The Weather Makers, The Future Eaters, Here on Earth and Atmosphere of Hope. He is currently chief councillor of the Climate Council. Tim’s most recent book is The Climate Cure: Solving the Climate Emergency in the Era of COVID-19.

Prasad Menon has over 40+ years of diverse experience in some of the premier multinational and Indian companies, across the Chemical and Power industry. He started his career with the Imperial Chemical Industries (ICI) and served for 20 years, followed by Nagarjuna Fertilizers. He joined the Tata Group in the year 2000 and served as the Managing Director at Tata Chemicals, and subsequently with Tata Power. He serves as Director on a number of Tata Boards, including Tata Industries, Tata Chemicals, TRF Limited and Tata Foundation. He is also Chairman of the Board of Tata Consulting Engineers, Tata Projects and the Tata–Singapore Airlines Joint Venture. He is also a Director on the Board of Axis Bank, SKF India and Sanmar Group. Apart from his Board responsibilities, Mr. Menon is actively involved in various advisory committees in the areas of Academics, Sustainability & Corporate Governance. He serves as an active Member of the Advisory Council of IITB-Monash Research Academy; Member of the Governing Council of Centre for Environment Education-Nehru Foundation for Development; Member of the Advisory Board of the Grantham Institute – London; Member of the Advisory Board of The Energy & Resources Institute (TERI); and on the Advisory Council of CII-ITC Centre of Excellence for Sustainable Development. Recently got inducted on the Board of Wildlife Trust of India.

Will Steffen has a long history in international global change research, serving from 1998 to 2004 as Executive Director of the International Geosphere-Biosphere Programme (IGBP), based in Stockholm, Sweden, and before that as Executive Officer of IGBP's Global Change and Terrestrial Ecosystems project. Will was the Inaugural Director of the ANU Climate Change Institute, from 2008-2012. From 2004 to 2011 he served as science adviser to the Australian Government Department of Climate Change. He is currently a Climate Councillor with the Climate Institute. 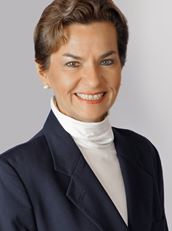 Christiana Figueres was the executive secretary of the United Nations Framework Convention on Climate Change (UNFCCC) (2010-2016) and the public face of the most pivotal climate agreement in history, the Paris Climate Agreement in 2015. Christiana and Tom Rivett-Carnac are the co-founders of Global Optimism, an organisation focused on creating environmental and social change, and the authors of The Future We Choose: Surviving the Climate Crisis.

Voices of Our Future

Beyond Fire, Flood and Plague