Prepare to be inspired and delighted as five of Australia’s most talented picture book artists create an illustration live at the Big Backyard. Hear how their artistic careers began and learn about their favourite kinds of art to make, as they draw, paint and sketch a new work. Featuring Sami Bayly, Matt Cosgrove, Gus Gordon, Dub Leffler and Marjorie Crosby-Fairall.

Recommended for ages four and up.

Sami Bayly is a natural history illustrator based in Armidale, who loves all things weird and wonderful. She finds the beauty and importance of all animals regardless of their appearance, and hopes to share her appreciation with others. Sami's first book, The Illustrated Encyclopaedia of Ugly Animals, won the Children's Indie Book of the Year Award and the ABIA Book of the Year for Younger Children. Her second book, The Illustrated Encyclopaedia of Dangerous Animals was been shortlisted for the 2021 Indie Book Awards.

Matt Cosgrove, lover of words, pictures and books in general, is the author and illustrator of the bestselling Macca the Alpaca series, including the latest instalment, Macca and Al, Super Pals. He regularly speaks at schools and libraries with the simple message: Keep Drawing, Keep Writing, Keep Reading. Matt’s picture book, Alpacas With Maracas, was the official National Simultaneous Storytime selection for 2019, with over 1 million kids across Australia and New Zealand reading together at the same time!

Marjorie Crosby-Fairall is an internationally published illustrator of over twenty children's books. Her books appear on the Premier’s Reading Challenge lists and have been shortlisted and won awards, including the CBCA Eve Pownall Award for her first picture book. Her picture books include Bear in Space with Deborah Abela and The Croc and the Platypus with Jacking Hosking. In 2021 she will releases Dinosaur Dads with Lesley Gibbes and Summer Blue) with Trudie Trewin.

Gus Gordon is an internationally acclaimed illustrator and author. He has illustrated and written over 80 books for children. His books Wendy, Herman and Rosie (2013 CBCA 'Honour book), Somewhere Else (2017 Speech Pathology book of the year), The Last Peach and Finding François have sold in over 20 countries world wide and have received extensive international recognition. He has twice been nominated for the Astrid Lindgren Memorial Award. Gus lives with his wife and three kids in Sydney, Australia

Descended from the Bigambul people of South-West QLD, Dub Leffler is one of Australia’s most sought after illustrators of children’s literature. He has written two books for children and is currently illustrating his 26th title. Dub’s work has led to opportunities to travel across the globe including remote Australia, Europe, Indonesia and America and his illustrations are now in permanent collection in The National Library of Congress in Washington, Dc. Dub’s most recent work is Bindi written by the Kirli Saunders. 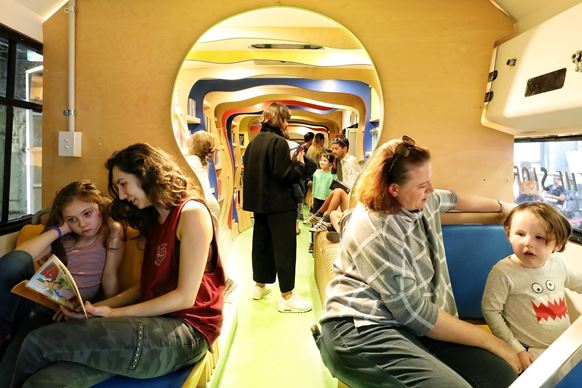