Although one in five Australians live with disability, people with disabilities remain under-represented in our literature. Growing Up Disabled in Australia is an urgent anthology of first-person stories described by The Sydney Morning Herald as “gripping the reader by the collar while pulling the rug out from under their feet”. Hear from four of the collection’s contributors – Fiona Murphy, Alistair Baldwin, Gayle Kennedy and Belinda Downes – as they speak with its editor, Carly Findlay, about navigating disability and what it means to be regarded as ‘different'.

If you are interested in this event but are unable to attend for Access reasons, please complete this online form and we will notify you when a recording becomes available. 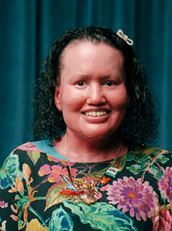 Carly Findlay OAM is a writer, speaker and appearance activist. She is the author of memoir Say Hello and the editor of Growing Up Disabled in Australia. She has been published in the ABC, The Guardian, The Age, The Sydney Morning Herald, CNN and Vogue.

Belinda Downes is a language scientist and linguistics teached who can be found via a quick internet search for ‘Coffee with Belinda Downes’ and occasionally on radio and television. She will never have too many Moleskine notebooks. Belinda is also the proud owner of a rare 1971 model Bilateral Tessier Cleft.

Gayle was Indigenous Editor/Writer at Streetwize Comics from 1995 to 1998. Her poetry collection Koori Girl Goes Shoppin was shortlisted for the David Unaipon Award, an award Gayle won in 2006 with Me, Antman & Fleabag. It was shortlisted for a Victorian Premier’s Literary Award, Deadly Award and commended for the Kate Challis RAKA Award. Gayle’s published 11 novels between 2011 and 2014. Gayle’s presented at writers festivals, NAIDOC events, and nationally and internationally on her experience with polio and disability in general. Gayle’s work has been published in Puffin, Currency, Ora Nui, Edinburgh Review anthologies, Southerly Magazine and Verity La, amongst others.

Alistair Baldwin is a writer, comedian, thought leader and sometimes blonde based in Naarm / Melbourne. He has written for The Weekly, Hard Quiz, Get Krack!n and At Home Alone Together. He is a member of experimental comedy duo Nemeses with Vidya Rajan. The pair created a livestream sitcom for the Wheeler Centre and hosted Melbourne Fringe’s Program Launch. He has been published in Metro, Archer, un. Magazine, The Guardian and ACMI Ideas – and is a contributor to Growing Up Disabled In Australia.