The racial justice movement gained momentum around the world in 2020, but what happened in Australia? Across the anglosphere, statues toppled, mastheads faced a reckoning and protests on the streets met conversations about representation and accountability. Yet Australian newsrooms and TV screens, our cultural and media institutions, somehow missed the moment. Why are the key figures in our public sphere so bad at addressing entrenched racism, structural power and unchallenged whiteness? Journalist Amy McQuire, triple j Hack’s Avani Dias and writer and broadcaster Sami Shah confront the white elephant in the room, with IndigenousX’s Rhianna Patrick. 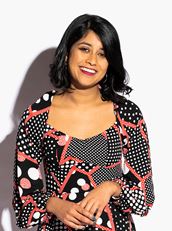 Avani Dias is the host of Australia’s national current affairs show for young people, Hack on triple j, which broadcasts to millions of people around the country. Avani has interviewed the country’s leaders and some of the world’s leading thinkers, and reported on and investigated major stories. Avani has been a Walkley Awards finalist three times and has been recognised with a number of other journalistic accolades. She was previously a multi-platform reporter for ABC News across TV, radio and online in Sydney and Darwin.

Amy McQuire is a Darumbal and South Sea Islander woman from Rockhampton in central Queensland. She is currently completing a PhD at the University of Queensland on media representations of violence against Aboriginal women. She is also a freelance writer and journalist. Amy has been the editor of the National Indigenous Times and Tracker magazine, was a former NITV National News political correspondent and journalist, senior reporter for New Matilda and producer for 98.9 FM in Brisbane. Recently, Amy was the Indigenous affairs reporter at BuzzFeed News Australia. Over the past four years, Amy has co-hosted the investigative podcast Curtain with human rights lawyer Martin Hodgson. The podcast puts forth the case for innocence for Aboriginal man Kevin Henry, who was wrongfully convicted in 1992.

Rhianna Patrick is a Torres Strait Islander media professional with family connections to the Zagareb (Mer) and Wagadagem (Mabuyag) clans of Zenadth Kes (Torres Strait). Rhianna spent nearly two decades at the ABC working across news and television documentaries and presenting national radio programs. In late 2020, she joined IndigenousX as its Head of Audio and Podcasts and will launch IndigenousX’s first podcast series in the middle of the year.

Sami Shah is a multi-talented writer, comedian, performer and broadcaster. He co-hosted the ABC Radio Melbourne Breakfast program with Jacinta Parsons for two years from 2018. Sami also presented RN Saturday Extra, and produced and presented a series on ABC RN’s Earshot program, The Islamic Republic of Australia. Sami has also written and performed a two-part series for BBC Radio 4 – A Beginner’s Guide to Pakistan – and appeared as a panelist on QI with Stephen Fry. He was awarded the Best Local Act at the 2013 Perth International Comedy Festival and Best WA Comedy at 2016 Fringe World. His autobiography, I, Migrant, was nominated for the NSW Premier’s Literary Award (2015), the WA Premier’s Literary Award (2016) and the Russell Prize for Humour Writing (2015).