Prepare to be inspired and delighted as five of Australia’s most talented picture book artists create an illustration live on the Big Backyard stage. Hear how their artistic careers began and their favourite kinds of art to make, as they draw, paint and sketch a new work. Featuring Sami Bayly, Gus Gordon, Ronojoy Ghosh, Nicki Greenberg and Aura Parker. Recommended for ages four and up.

As a natural history illustrator based in Newcastle NSW, Sami Bayly loves all things weird and wonderful. Sami finds beauty and value in all animals regardless of their appearance, and hopes that her work allows adults and children to share in her appreciation of aesthetically challenged species from around the world. The Illustrated Encyclopaedia of Ugly Animals is her first book, with more exciting and unusual titles on the horizon.

Aura Parker is a best-selling author and illustrator of children's picture books, known for joyful stories, playful humour and whimsical watercolour, pencil and pen illustrations. Aura shares her enthusiasm for drawing and reading in visual literacy presentations and illustration sessions, encouraging children to be creative and brave. She is the author of Meerkat Splash, Cocoon and Twig are out now, with Goodnight Glow Worm released in late March.

Nicki Greenberg is an award-winning author and illustrator. Her books include critically acclaimed adaptations of The Great Gatsby and Hamlet which won the CBCA Picture Book of the Year in 2011. Nicki has also written a wide variety of books for younger readers, including her most recent release Cats Do Not Like Birthdays. Nicki loves surprise twists, crafting stories in verse, and flinging ink about. In her past life she worked as a lawyer. She may or may not be a witch.

Gus Gordon is an internationally acclaimed illustrator and author with over 80 books for children to his name. His books, including Wendy, Herman and Rosie, Somewhere Else and The Last Peach, are available in over 20 countries and have received international recognition. He has twice been nominated for the Astrid Lindgren Memorial Award, the world's largest award for children's and young adult literature.

Ronojoy Ghosh has been in the advertising industry for the past 18 years, including in India, Indonesia, Singapore and New Zealand. He currently lives in Australia with his wife and son and his work has been recognised with many advertising awards including a Gold at Cannes. Beyond advertising, his passion lies in writing and illustrating children's picture books. His first book Ollie and the Wind was shortlisted for the CBCA Book of the Year Award. His most recent books for children are Dear Grandpa and Bin Chicken. 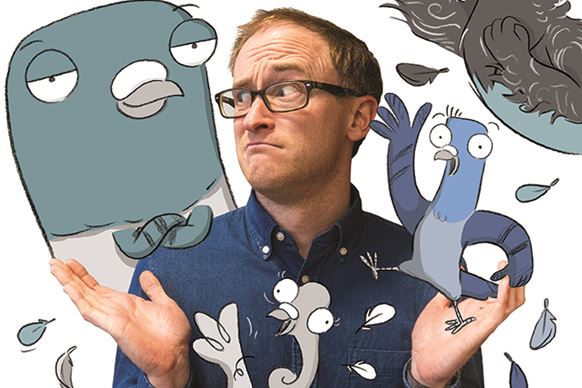