The Future of Black Britain and Europe

A panel of celebrated black British writers explore the history, post-Brexit present and future of black Britain and Europe. How have racial anxieties resurfaced since Brexit? In what ways is the UK yet to reckon with its imperial past? And how are ‘Afropeans’ forging new identities throughout Europe? Featuring Booker Prize–winning author Bernardine Evaristo (Girl, Woman, Other); photographer and Afropean: Notes from Black Europe author Johny Pitts; journalist and playwright Bim Adewunmi; and Guardian UK writer Nesrine Malik (We Need New Stories: Challenging the Toxic Myths Behind Our Age of Discontent).

Supported by the British Council. Bernardine Evaristo is supported by David Paradice.

Bestselling author Bernardine Evaristo won the 2019 Booker Prize with her eighth book, Girl, Woman, Other. It was also one of Barack Obama’s Top 19 Books of 2019. Her other books include Mr Loverman, Blonde Roots and The Emperor’s Babe. Her writing spans short fiction, reviews, essays, drama and writing for radio. As an activist, she has founded several successful arts inclusion projects such as The Complete Works (2007–2017), a mentoring scheme for poets of colour. She has won several awards and honours, including the Most Excellent Order of the British Empire in 2009. Bernardine is Professor of Creative Writing at Brunel University London and Vice Chair of the Royal Society of Literature.

Johny Pitts is a writer, photographer and broadcast journalist. He has received various awards for his work exploring Afro-European identity, including a Decibel Penguin Prize and an ENAR (European Network Against Racism) award. As part of an ongoing project, Johny founded and curates the award-winning online journal Afropean.com, part of the Guardian Newspaper’s Africa Network dedicated to the Afro-European diaspora, and has collaborated with Caryl Philips on a photographic essay about London’s immigrant communities for the BBC and Arts Council. Afropean is a Guardian UK, New Statesman and BBC History Magazine Best Book of 2019.

Bim Adewunmi is a journalist, playwright and podcaster whose work has been published in The Guardian, Vogue and New Statesman, among other publications. Her writing on culture at BuzzFeed News was selected to appear in The Best American Magazine Writing 2018. Her play, Hoard, was staged at the Arcola Theatre in London and published by Samuel French in 2019. Bim is the co-host and co-producer with Nichole Perkins of Thirst Aid Kit, a Slate podcast about pop culture and desire, and also wrote For Your Consideration: The Chrises with Nichole. Bim works as a radio producer at This American Life and lives in New York. 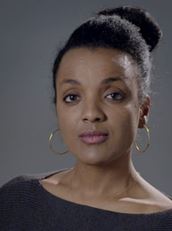 Nesrine Malik is a British Sudanese author and columnist and features writer for Guardian UK. She was born in Sudan and grew up in Kenya, Egypt and Saudi Arabia. She received her undergraduate education at the American University in Cairo and University of Khartoum, and her postgraduate education at the University of London. Alongside her journalism career she previously spent 10 years in emerging markets private equity. Her first book is We Need New Stories: Challenging the Toxic Myths Behind Our Age of Discontent.

Peter Pomerantsev: This is Not Propaganda