The Ethics of Parenthood

As society, technology and the planet itself have transformed in recent generations, fresh considerations have emerged around parenting. Guest curator Christos Tsiolkas considers the moral complexities of parenthood today in conversation with musician and writer Clare Bowditch, debut novelist and climate policy advocate Kawai Strong Washburn, and journalist Elfy Scott. Is it ethical to bring a child into a fraught and possibly apocalyptic world? How do we understand the privileges of technology to further extend our child-rearing years? And for authors, how does raising a child intersect with the writing life, and why are male writers still rarely asked about parenting or their decision to have or not have a child?

Kawai Strong Washburn was born and raised on the Hamakua coast of the Big Island of Hawaii. His work has appeared in Best American Nonrequired Reading, McSweeney's and Electric Literature's Recommended Reading, among others. He was a 2015 Tin House Summer Scholar and 2015–2016 Bread Loaf work-study scholar. He has lived and worked in Guatemala, Nicaragua, Palestine, Nigeria, Ghana, Liberia and Namibia. Today, he lives with his wife and daughters in Minneapolis. Sharks in the Time of Saviours is his first novel.

In 2019, Clare Bowditch became a bestselling debut author with her memoir Your Own Kind of Girl. It is a book about the stories we tell ourselves, and what happens when we believe them. Before becoming an author, Clare was best known as an ARIA Award–winning musician and songwriter, an ABC broadcaster and Rolling Stone’s Woman of the Year for her Contribution to Australian Culture. For the record, she believes writing a book to be substantially harder than writing a song.

Elfy Scott is a journalist, presenter and writer who currently produces and hosts the daily news show, The Junkee Takeaway on Facebook Watch. She was previously at BuzzFeed News reporting science stories and you may have read her columns and articles published in The Saturday Paper, Guardian Australia, SBS and Vice. 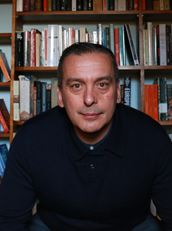 Christos Tsiolkas is the author of six novels, including Dead Europe, Loaded and Barracuda. His novel The Slap won Overall Best Book in the Commonwealth Writers' Prize 2009, was shortlisted for the 2009 Miles Franklin Literary Award, longlisted for the 2010 Man Booker Prize, won the Australian Literary Society Gold Medal, and was announced as the 2009 Australian Booksellers Association and Australian Book Industry Awards Books of the Year. Many of his books have been adapted for film, TV and for the stage. Christos is also a playwright, essayist and film critic for The Saturday Paper. His latest novel is Damascus.

Shaun Micallef: Mad as Hell and Back