A master at mapping the scope of our current devastation, novelist Jeff VanderMeer brings fresh horrors with each new book along with themes of resilience and resistance. Where, exactly, does he find optimism for the future amongst the ruins? James Bradley meets the celebrated author of Borne – which Colson Whitehead hailed as “a thorough marvel” – and Annihilation. They discuss Jeff’s new novel Dead Astronauts, and look at how his stories take on special significance in a time of ecological crisis, celebrating the beauty of the world around us and presenting an urgent reminder of how much life we stand to lose.

Jeff VanderMeer is an award-winning novelist known for his emphasis on environmental themes. His critically acclaimed novel Borne was called “a thorough marvel” by Colson Whitehead, was a finalist for the Arthur C. Clarke Award, and is being developed for television by AMC. His critically acclaimed New York Times–bestselling Southern Reach trilogy won the Shirley Jackson Award and Nebula Award. The trilogy prompted The New Yorker to call the author “the weird Thoreau”, and was published in 35 countries, with Paramount Pictures releasing a movie in 2018. Jeff’s non-fiction has appeared in The New York Times, Guardian UK, The Atlantic.com and The Los Angeles Times. Jeff’s latest book is Dead Astronauts, the focus of a profile in The New York Times. He lives in Tallahassee, Florida, with his wife, the award-winning editor Ann VanderMeer, and Neo, a cat famous on the internet. 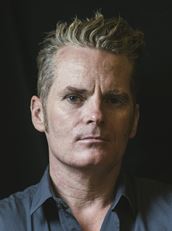 James Bradley is an author and critic. His books include the novels Wrack, The Resurrectionist and Clade, a book of poetry, Paper Nautilus, and The Penguin Book of the Ocean. His new novel is Ghost Species.

How Democracy Can Survive Social Media