See some of the country’s most respected First Nations poets join rising stars to read powerful works from the new anthology Fire Front. A testament to the renaissance of First Nations poetry happening right now, the collection is divided into thematic sections introduced by a leading Aboriginal writer and thinker, followed by poems from a range of voices. Hear from the anthology’s curator, Gomeroi poet and academic Alison Whittaker, alongside Evelyn Araluen, Tony Birch, Claire G. Coleman, Ellen van Neerven, Lorna Munro, Lizzie Jarrett and more.

Tony Birch is the author of three novels, four short story collections and a book of poetry. He is also a regular essayist. His most recent novel is The White Girl. In 2017, he was awarded the Patrick White Literary Award for his contribution to Australian literature and culture.

Claire G. Coleman is a Wirlomin Noongar woman whose ancestral country is on the south coast of Western Australia. Her novel Terra Nullius won a black&write! Fellowship and a Norma K. Hemming Award and was shortlisted for the Stella Prize and the Aurealis Science Fiction Award. She writes poetry, short-fiction and essay and has been published widely. The Old Lie is her second novel.

Evelyn Araluen is a poet, researcher and co-editor of Overland Literary Journal. Her widely published criticism, fiction and poetry has been awarded the Nakata Brophy Prize for Young Indigenous Writers, the Judith Wright Poetry Prize, and a Wheeler Centre Next Chapter Fellowship. Born and raised in Dharug country, she is a descendant of the Bundjalung nation.

Lorna Munro, or ‘Yilinhi’, is a Wiradjuri and Gamilaroi woman, multidisciplinary artist and regular radio and podcast host at Sydney’s Radio Skid Row. A long time active member of her Redfern/Waterloo community, her work is informed by her passion and well-studied insight in areas such as culture, history, politics and popular culture. Lorna has travelled the world showcasing her skills and distinctive style of poetry and political commentary. She was also the sole designer and creator of Sydney’s, and possibly “Australia's” first initiative to teach Aboriginal language through poetry in partnership with Red Room Poetry in 2015. Throughout her career she has been on stage, in films and on paper, namely compiling and editing Paper Dreaming: Our Stories Our Way. Lorna continues to work tirelessly mastering many art forms, raising funds, supporting and advocating for her community and her people on the local, national and international stage. 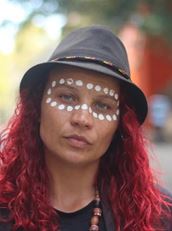 Alison Whittaker is a Gomeroi poet, essayist and legal scholar. She is a Research Fellow at the Jumbunna Institute. In 2017–18, Alison was a Fulbright scholar at Harvard Law School where she was named Dean’s Scholar in Race, Gender and Criminal Law. Her second book Blakwork was shortlisted for the 2019 Prime Minister's Literary Award. Her most recent book, Fire Front, is an anthology of, and about, First Nations published poetry.