Roanna Gonsalves is the author of The Permanent Resident, which won the NSW Premier’s Literary Award Multicultural Prize and was longlisted for the Dobbie Literary Award in 2018. Roanna was born and brought up in Mumbai, India. She attended St. Xavier’s College in Mumbai, and came to Australia as an international student in 1998. Roanna was the UNSW Copyright Agency Writer-in-Residence in 2018.

Shirley Le is a Vietnamese-Australian writer from Western Sydney and is part of the Sweatshop Writers’ Collective. In 2017 she was the recipient of a WestWords Emerging Writers Fellowship. Her writing has been published in The Lifted Brow, Meanjin, SBS Life and Griffith Review. Shirly is currently working on her debut novel.

Monikka Eliah is an Assyrian-Australian writer from Fairfield and is part of the Sweatshop Writers' Collective. Monikka has participated in National Theatre of Parramatta’s Page to Stage program and Curious Works Breakthrough Program and was a recipient of the Southland's Emerging Artists Award in 2018. Monikka's work has been published in The Big Black Thing, SBS Life and The Lifted Brow. 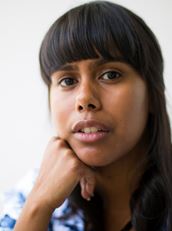 Phoebe Grainer is a Djungan woman from Far North Queensland and is part of Sweatshop: Western Sydney Literacy Movement. Phoebe completed her Bachelor of Fine Arts at the National Institute of Dramatic Art in 2016. Her performance credits include Saltbush, Scorched amd Yellamundle Festival Readings. Phoebe's work has been published in The Lifted Brow.

Ferdous Bahar is a Bengali-Australian writer from Minto and is part of Sweatshop: Western Sydney Literacy Movement. Ferdous is studying a Bachelor of Laws at the University of Sydney and was awarded the David Burnett Scholarship in Social Justice in 2018. Ferdous is currently developing a series of short stories and essays for Sweatshop and SBS Life.

Winnie Dunn is a Tongan-Australian writer and community arts worker from Mt Druitt. She is the manager of Sweatshop: Western Sydney Literacy Movement and the literary editor of Sweatshop Women, The Big Black Thing and Bent not Broken: Ten Years of Creative Writing from the City of Canterbury Bankstown. Winnie's essays and short stories have been published in The Lifted Brow, Sydney Review of Books, Meanjin, The Griffith Review and SBS Life. She completed her Bachelor of Arts degree at Western Sydney University in 2017.