Bankstown Poetry Slam presents an all-female line-up of Western Sydney’s most dynamic storytellers. Join them for an hour of fierce poetry, and click your fingers along to stories of resilience, strength and hope with sensational performers. Hosted by Sara Mansour.

Aishah Ali is a fourth-year law and politics student, spoken word artist and filmmaker. Her poetry has been published in the BPS Anthology, The Resurrection, Vertigo and Whynot?. In 2017, she placed second in the BPS Grand Slam and went on to perform with prominent organisations such as Sydney Writers' Festival, Moonlight Feminists and Batyr. In 2018, she has taken the winning title with her team Mouthful of Melanin at BPS Grand Finals and directed her second film in collaboration with Amnesty International.

Aida Zjakic was first introduced to Bankstown Poetry Slam through the Real Talk writing workshops in 2014. A fan of both writing and performing, she immediately fell in love with spoken word. Since then, slam poetry has given Aida some incredible opportunities, including performing at Parliament House.

Mel Senter trained as an actor, and identifies as a dancer, poet and fierce woman. Born in Papua New Guinea to the daughter of a chief, her ancestors sit at the base of her spine, spurring her on to tell her story, hoping to spark wildfires within listeners that burn down differences, uniting us in our pain and understanding of this human condition.

Layla Mkhayber is a 20-year-old Lebanese performance poet and musical theatre enthusiast currently living in the Western Sydney. Layla utilises poetry to speak in and stand in her truth, and is currently on the committee for the Bankstown Poetry Slam. She has been blessed to perform in Sydney, Adelaide, Brisbane and Canberra for the Sydney Writers' Festival, the Queensland Poetry Festival and at Parliament House.

Mây Trần is Vietnamese-Australian poet, theatre-maker and activist. In 2018, she supported musician and poet, Odette, in an intimate Brighton Up Bar gig. In May 2019, she will perform in Playlist at the Sydney Opera House Playhouse and continue to perform her poetry regularly around Sydney.

Daiane Moret is a mother and an artist from Brazil. She is the current Bankstown Grand Slam winner, alongside her team. Dai has been living in Sydney for 8 years. Her work navigates the paradoxes of motherhood, the complexities of being a woman and the philosophical inputs of some important feminists. She has featured at Poetica and embodies the spoken word. 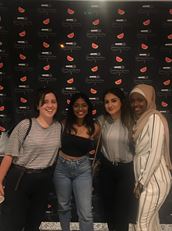 Hailing from varying ethnicities and ages, Freedom Writers were born out of Bankstown Poetry Slam's Grand Slam in 2017. Upon claiming the titles of the People's Choice and Grand Slam Champions, Freedom Writers have continued to perform together since their inception, their most notable performances at Melbourne's Sapologie, Australian Poetry Slam's Western Sydney Finals 2018 and Sydney Writers' Festival 2018.

Hawraa Kash uses her poetry to create her own platform and provide a safe space for others. Her writing encompasses her passion for a holistically healthy life, mind, body, and spirit. She ventures into the realms of advocacy for women, mental health awareness, and her life’s trials and tribulations.

Alice Tame is a 22 year old high-school-teacher in training studying at the Sydney Conservatorium of Music. Alice performs poetry, music and comedy and has been lucky enough in the last few years to be a featured performer at the Sydney Opera House, Parliament House, the Sydney Writers' Festival, as well as venues in Australian and abroad. Alice is endlessly proud to be part of the committee for Bankstown Poetry Slam.

Nieshanka is a performance poet who loves to speak her mind, share stories and move an audience. She is currently in her second year of Arts/Law at UNSW, and discovered her interest for performance poetry in high school. This saw her take on the form for her HSC English major work. Since then Nieshanka has won the 2018 Bankstown Poetry Grand Slam alongside her team, and continues to perform at various community events for celebrations like Refugee Week.

Sim Kaur is a 16-year-old South Asian performance poet from Western Sydney. She began competing at Bankstown Poetry Slam in 2018 and writes about her personal experiences with girlhood and adolescence.

Sharnay Mkhayber attended her first slam at Diversity Fest at Western Sydney University in 2015, and was entranced by the way Iman Etri performed for the first time. She then ran home and penned her first spoken word poem. Since that amazing introduction, she has placed at both Bankstown Poetry Slam and Parramatta Poetry Slam, won the BPS Olympics and was voted people’s choice in the 2016 Grand Slam. She has worked in high schools facilitating poetry workshops such as Real Talk and Stand Tall Speak Out.

Amani Mahmoud is an aspiring writer currently studying law and social political science. Amani has been performing at Bankstown Poetry Slam since 2018 and was part of the runner up team for the 2018 Grand Slam.

Zena Maghchouch is a Lebanese performance poet from Western Sydney. She is a research student examining the Arab diaspora community in Western Sydney involved in the Palestinian resistance movement.

Sara Mansour is a lawyer, poet, co-founder and director of Bankstown Poetry Slam (BPS). Sara uses her art and passion for justice to empower others through poetry. She was involved in the 2018 YouTube Creators for Change project and also gave a TEDx talk in 2018 on her work with BPS.

Starting the Conversation: Introducing the Holocaust to Young Readers