Clive James died in November 2019, leaving behind an unrivalled legacy of books, poetry, prose, essays and memoirs, as well as golden moments of television broadcasts and cultural criticism that showcased his gift for the knockout aphorism. Join a panel of Clive’s friends and fellow writers as they read a selection of work from the ‘Kid from Kogarah’, share stories and celebrate his life.

This podcast is supported by the Copyright Agency's Cultural Fund. 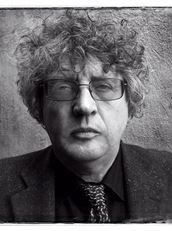 Paul Muldoon was born in County Armagh in 1951. He is the author of thirteen books of poetry including Moy Sand and Gravel, for which he received the 2003 Pulitzer Prize for Poetry. Other recent awards are the Pigott Prize and the Queen's Gold Medal for Poetry. Since 1987 he has lived in the United States, where he is the Howard G. B. Clark Professor in the Humanities at Princeton University. His most recent collection of poems is Frolic and Detour.

Kathy Lette is a celebrated and outspoken comic writer who has an inimitable take on serious current issues. She is one of the pioneering voices of contemporary feminism. She first achieved succès de scandale as a teenager with the novel Puberty Blues, which was made into a major film and a TV mini-series. After several years as a newspaper columnist and TV sitcom writer in America and Australia, she’s written 11 international bestsellers in her characteristic witty voice, including Mad Cows, How to Kill Your Husband (and other handy household hints) (staged by the Victorian Opera) and The Boy Who Fell to Earth. Kathy Lette lives in London.

Trent Dalton is a staff writer for the Weekend Australian Magazine and a former assistant editor of The Courier Mail. He’s a two-time winner of a Walkley Award for Excellence in Journalism, a four-time winner of a Kennedy Award for Excellence in NSW Journalism and a four-time winner of the national News Awards Features Journalist of the Year. His number 1 bestselling debut novel, Boy Swallows Universe, broke records to become the fastest selling Australian debut novel ever. It is being published globally across 34 English language and translation territories and has won many major Australian literary prizes including the UTS Glenda Adams Award for New Writing at the 2019 NSW Premier’s Literary Awards, the 2019 Indie Book of the Year, NSW Premier’s Literary Award for New Writer and People’s Choice, the Indie Book of the Year and a record-breaking four Australian Book Industry Awards. Boy Swallows Universe is currently being adapted for the stage by Queensland Theatre Company and for the screen, with Joel Edgerton attached.