A masterful work of emotional force from one of the greatest, most daring contemporary writers, Strange Hotel is the blistering new novel from Eimear McBride, the Women’s Prize for Fiction–winning author of A Girl is a Half-formed Thing. The story follows a nameless woman as she enters various hotel suites, and is forced to reckon with the turning tides of a life she’s tried desperately to escape. Heather Rose talks to the author Anne Enright has called “that old-fashioned thing, a genius”.

Strange Hotel is available from Gleebooks.

Eimear McBride' s debut novel A Girl is a Half-formed Thing won the Bailey's Women's Prize for Fiction, the Goldsmiths Prize and Irish Novel of the Year. The Lesser Bohemians won the James Tait Black Memorial Prize and was shortlisted for the International Dublin Literary Award. In 2017 Eimear was awarded the inaugural Creative Fellowship at the Beckett Research Centre, University of Reading. The resulting performance work, Mouthpieces, was recorded and broadcast by RTE Radio. Strange Hotel is her latest novel. 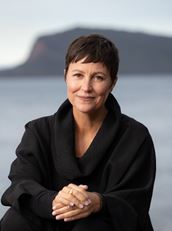 Heather Rose is the Australian author of eight novels, writing for both adults and children. Her books have been shortlisted, longlisted or won awards for literary fiction, crime fiction, fantasy/science fiction and children's literature. Her seventh novel, The Museum of Modern Love, notably won the 2017 Stella Prize and the Christina Stead Prize. Her latest book is Bruny. Heather lives by the sea in Tasmania.