As part of Cheltenham Literature Festival, Sydney Writers' Festival co-presented a special conversation between Wiradjuri author Tara June Winch (The Yield) and Kurdish film-maker, writer and refugee Behrouz Boochani (No Friend but the Mountains). Now released as a podcast, the award-winning pair discuss their powerful works with shared themes of language, colonial violence and writing about Australia from the outside. 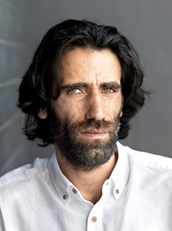 Behrouz Boochani is a Kurdish-Iranian journalist, scholar, cultural advocate, writer and filmmaker, founder of the Kurdish language magazine Weya, and an Honorary Member of PEN International. He holds a Masters degree in political geography and geopolitics. He In 2013 he fled Iran and became a political prisoner of the Australian Government and was incarcerated in the Manus Regional Processing Centre (Papua New Guinea). He is the author of the award-winning and bestselling No Friend But the Mountains.

Tara June Winch is an Wiradjuri writer, born in Australia and based in France. She is the author of the story collection After the Carnage and the novels Swallow the Air, and most recently, The Yield. She was the literature recipient of the international Rolex Mentor and Protégé initiative, which saw her mentored by Nobel laureate Wole Soyinka.